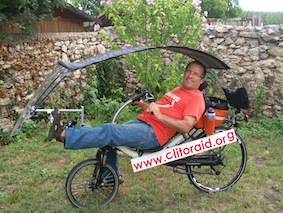 Hervé Bibens, very active volunteer of the association clitoraid living in the region of Bordeaux in France, found an original way to collect donations and to promote the cause.

On August 9th, he will start his first Tour de France in bent bike, for 3 months. His route will begin at Libourne to end in Bordeaux after approximately 2450 km.

Numerous volunteers will support him on his way, and it will be a good opportunity for him to go in fire stations where he will speak about his action as he was a fireman for more than 30 years. During the trip he will sell a DVD about his life: "A fireman towards the stars ".

The collected donations will only be used to help repair excised women, without management fees. 1 given euro = 1 euro used at first to finish the hospital and secondly for the operations of women.