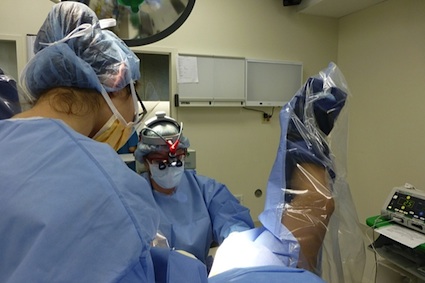 LAS VEGAS, March 5 - With Clitoraid’s volunteer team still awaiting the license it needs to open its new medical center in Burkina Faso, a facility dedicated to providing free clitoral repair surgery for genitally mutilated women, American surgeons who volunteered for Clitoraid's first campaign there have already operated on 13 women, according to a statement released today by Clitoraid.

“A doctor friend offered us use of his own medical facility so we could proceed with helping the 80 women awaiting the free operations we promised," explained Dr. Brigitte Boisselier, president of Clitoraid and spokesperson for the International Raelian Movement (IRM). “We are deeply grateful to him!"

She said Clitoraid's partner in Burkina Faso, the women's association AVFE, was informed only 5 days ago that the opening of the hospital couldn't proceed on March 7 as initially planned.

“The same day, we were also told that the license refusal was due to lobbying by influential detractors, including people associated with the Catholic Church,” Boisselier said, adding that this information was later confirmed by a representative of the Catholic Church.

“That person told the BBC that Clitoraid can’t be seen as fit handle to handle such humanitarian work due to its affiliation with the Raelian Movement,” Boisselier said. “But nothing could be further from the truth. Our new hospital is the result of people of many faiths contributing time and money, including two American surgeons and a worldwide volunteer. For the Catholic Church to be giving lessons to the Raelian Movement about humanitarian endeavors is ludicrous. We won’t take lessons from those who have not only denied and tried to suppress most major scientific discoveries for centuries, but are also responsible today for thousands of unnecessary deaths, due to their policy of prohibiting condom use even for AIDS victims."

Clitoraid is a non-profit, U.S.- based humanitarian organization. It was founded in 2006 at the suggestion of Rael, spiritual leader of the IRM.

“His idea was to promote the clitoral repair surgery developed by a French surgeon and make it available free of charge to as many FGM victims as possible,” she said. "I find it outrageous that some misinformed people are denying Clitoraid the right to offer this great service when our hospital is ready to open its doors!"

She added that Clitoraid plans to open additional medical centers on the African continent to help women in many other countries. And she said she applauds other doctors offering the clitoral repair surgery.

"That is excellent news, for the more this clitoral repair surgery becomes available in FGM-affected areas, the better. “It's a powerful deterrent against doing the mutilation in the first place, for why do damage that can easily be undone?"