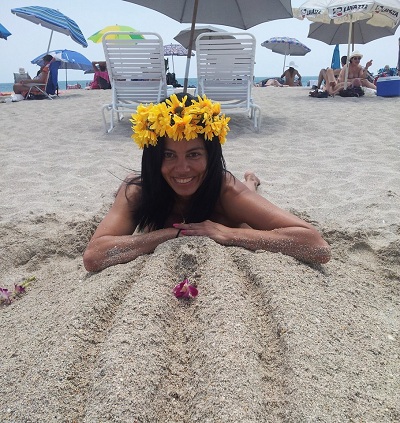 First, it’s been widely reported by media everywhere, all around the planet. From the United States to Finland to Taiwan; from Argentina to Ghana; from Lebanon to Indonesia to Peru; from Japan to Holland, Chile, Bulgaria and more, the news spread like wildfire!
People wrote to us offering songs, artistic photos and other input, and also donated to help us complete construction of our new hospital in Burkina Faso, West Africa. It will open Oct. 8 and be used to surgically repair the clitorises of FGM victims. Some of those who wrote in even offered to volunteer their medical services there!

During Clitoris Awareness Week, women and men throughout the Americas took to the streets and beaches to share valuable info about the little-known clitoris and its deep, endless riches. As you would expect, most of the volunteers who dared to stand up for this first Clitoris Awareness Week were Raelian, because the Raelian spirituality and values freely embrace the beauty of the human body and the sexual pleasure that inherently comes with it. But most people just haven't thought about the clitoris until now. With all the publicity generated by the first Clitoris Awareness Week, we expect a big turnout of non-Raelians to join us next year!
Regardless of faith, it is Clitoraid's objective to help rid society of the sexual shame and guilt that most women around the world (genitally mutilated or not) have been made to feel as a result of their primitive, patriarchal, religious upbringing.

Below are some pictures of the festive and educational events that took place during Clitoris Awareness Week:

We began our Clitoris Awareness week action by sending a press release to all the media outlets in Cartagena, Colombia. We also placed numerous posters in different universities around that city. The following Sunday, we closed the event with a grand beach promotion at the most popular and cosmopolitan location on the coast, where people of many nationalities gather. With our colorful banners, posters and flyers, we began to walk down the beautiful beach. As we walked, we ran into a group of physicians, with whom we had a very gratifying conversation. We also encountered a man from Spain who has a radio station there. Upon hearing of our mission, he said he would gladly promote Clitoris Awareness Week on the Iberian peninsula! Later, another tourist from Spain approached us with her husband, who is from Belgium. They both said our action was absolutely wonderful! Ruby Pachero, Clitoraid Leader Colombia, South America 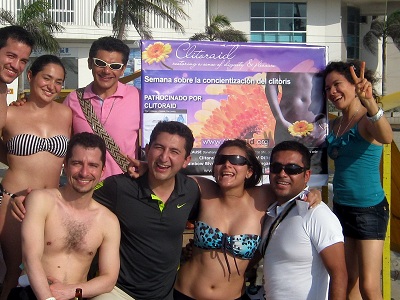 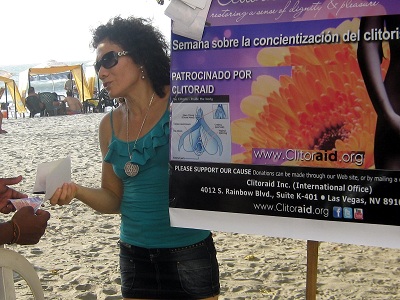 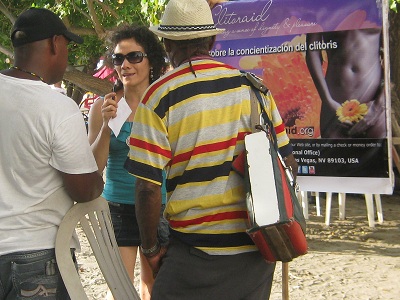 "On Saturday May 11, our Clitoraid volunteers took part in a beautiful activity to help women become more aware of the clitoris and its importance in sexual pleasure.
We gathered in downtown La Vega where we passed about 100 flyers to women who walked by. These flyers contained all the information about this event.
This was a great experience for me, as a young woman in my 20's, for all of us. We realized that many women do not know the term "clitoris" and feel very shy speaking about this topic, but we laughed together and encouraged them to fully live their sexuality.
We also met a young man who took pictures of us and who appeared surprised that we dared to have such free conversation and had the courage to wear Tshirts that said: I LOVE MY CLITORIS !
Some men in a clothes boutique nearby and at the ice cream parlor called us over to hear what this was all about and were very supportive. We hope they are as supportive with their partner masturbating in the privacy of their home which is sometimes a challenge for men raised with macho values." Kundaliny Dias, Clitoraid Leader, Dominican Republic 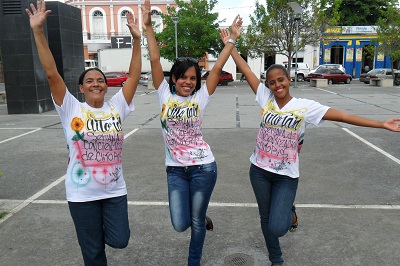 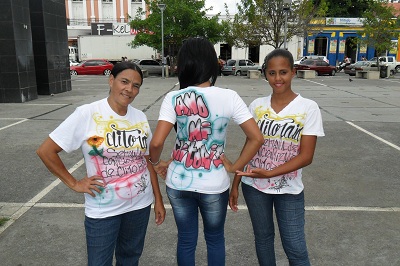 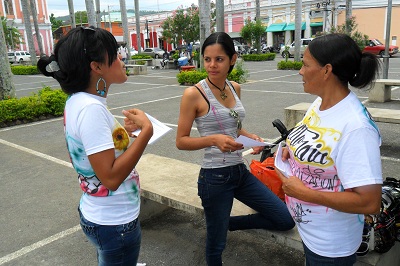 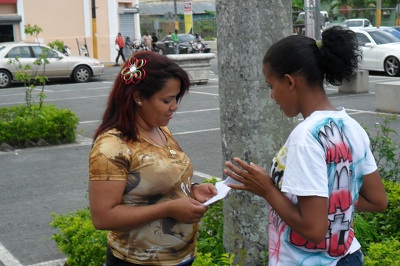 ""Our event in downtown Chicago was held on Sunday, May 12, along the famous Michigan Mile. Michigan Avenue is one of the most popular venues in the Chicago Loop, with its crowded streets, fine shops and tourist destinations.

I was so pleased to be the “Vulva girl.” Marc Letourneau and Larry Abdulla served as my escorts and carried their Clitoris Awareness Posters high above the crowds of people. They were so friendly and gentle as they talked with people while carrying out the very tough task of carrying their posters for hours in the cool 50-degree Fahrenheit temperatures of the Chicago spring. But we enjoyed every minute of it, and despite the cold, we had the hottest of times.

We enjoyed watching people’s reactions as they confronted our displays. Some laughed, some looked surprised to see us there, and some said they agreed with our efforts. Others didn’t understand.
As a team, we shared a passion and delight in talking people about the clitoris, about Clitoraid, and about our worldwide efforts to help victims of Female Genital Mutilation. It was heartwarming to discover that so many people are interested in supporting our activities. Lots of people took pictures of us, both separately and with our displays. Many said they would put those photos on their Facebook pages. We thanked them for doing this and for helping us to spread our message. It was a wonderful day and I really felt this Chicago event had a positive effect on both the women and the men. " Sonoko Tagami, Chicago Clitoraid Leader 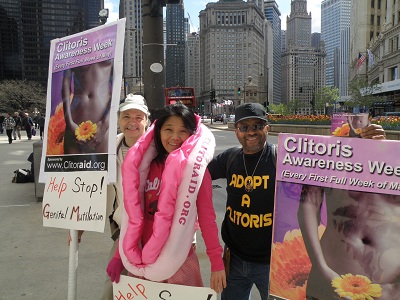 ”Our Clitoris Awareness Week activity on the Las Vegas Strip caught the attention of droves of passerbys. That’s a really big accomplishment because Las Vegas is a city that’s always on sexual sensory overload. ☺

Our display and vulva outfits made passing couples smile, and groups of young men jumped at the opportunity of having their picture taken with the giant vulva costumes Ouhi and I were wearing. Those photos will certainly be something to show their friends back home! In contrast, young women approached us with far more shyness (unless the alcohol they were sipping from their Eiffel Tower shaped glasses had already taken away their inhibitions).

We interviewed some of the spectators to get their reactions about Clitoris Awareness Week, and found that many supported our action. A Las Vegas mother and her teenaged daughter stopped by to share their thoughts. The daughter quickly vanished, embarrassed by the discussion, leaving the mother to speak with us about the importance of giving children a good sexual education. She said it’s especially important to do that in a school district where abstinence is advocated and means of protection during intercourse cannot be lawfully discussed in school.

A young girl agreed to give us her impression of the clitoris. She timidly said that the clitoris is where babies come from. No surprise here, for most high school science texts in the Western World fail to show the clitoris as part of the human anatomy. It’s not part of the reproductive system, and its sole function is to provide sexual pleasure. Rather than have to explain this, those who approve the texts are more comfortable omitting the clitoris altogether, as though it doesn’t even exist!

Naturally, we want to change that! Clitoris Awareness Week is about inviting society to make changes in how we view sex and how we speak about sex, especially when it comes to women’s sexual pleasure.

This jolly educational activity in the street gave us all, women and men alike, a great feeling of accomplishing something necessary for our society. We did it with humor and lightheartedness and we look forward to expanding our impact next year!” Lia Steinman, Clitoraid Leader, Las Vegas, NV 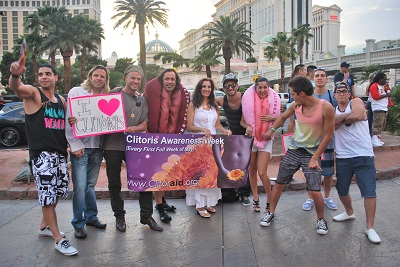 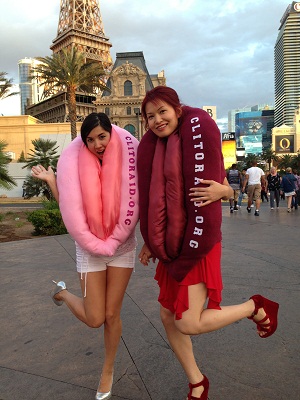 "The Miami team had a blast at the nude beach there, finishing up Clitoris Awareness Week by building a vulva in the sand and passing out flyers to onlookers. We had a great time as a team, talking to people, laughing together and just enjoying our state of being. We were able to legally go completely without clothes, since this was an approved nude beach, and we were also without shame about our naturally exposed sexual organs. The sun was shining, the ocean was so blue, and the beach was packed with friendly and curious humans enjoying the same freedom of being. What a beautiful day!" Raquel Vergara, Florida Clitoraid Leader 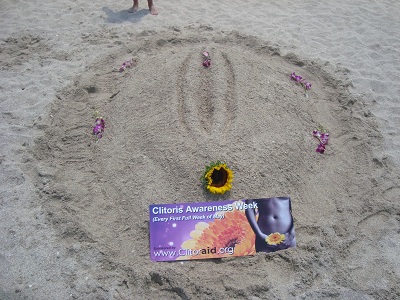 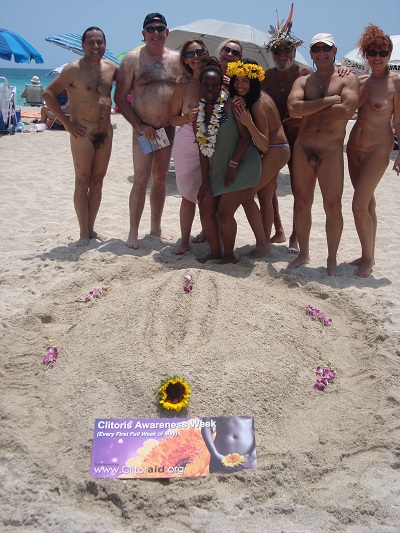