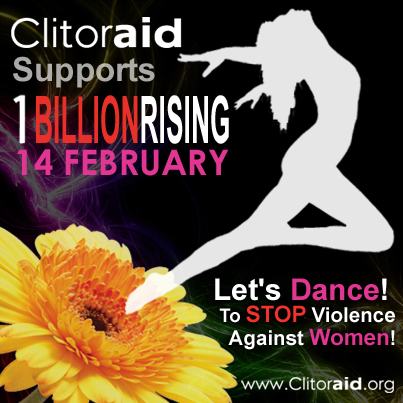 LAS VEGAS, Feb. 10 – On February 14, in conjunction with the V-Day Movement originated by Eve Ensler, Clitoraid, a nonprofit organization that assists victims of female genital mutilation (FGM), will support and participate in “One Billion Rising,” an international call to end violence against women.

“One in three women living today – a total of one billion women around the globe – will be raped or beaten within her lifetime and every 6 minutes, a little girl is being circumcised and that’s an atrocity,” said Nadine Gary, Clitoraid’s director of communications. “Therefore, for the 15th anniversary of V-Day on February 14, Clitoraid supporters around the world will join one billion women plus those who love them to walk, dance, and above all else, rise up and demand an end to that violence.”

“Along with the obvious goal of eliminating violence against women, Clitoraid has always supported Eve Ensler’s work,” Gary explained. “We applaud her for such things as setting up safe houses in Kenya to protect girls and women who have fled their homes rather than become FGM victims.”

Gary said Clitoraid’s participation in One Billion Rising will include:

“We’re holding community awareness events throughout the United States and Canada, in European countries like France, Switzerland and Italy; in Australia and South America, and in Southeastern Asia, where large numbers of potential FGM victims are at high risk in Indonesia,” Gary concluded.
Tweet