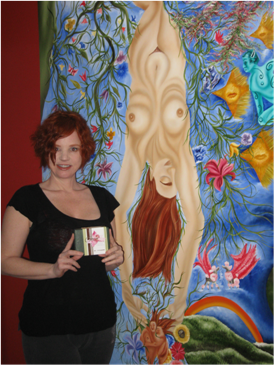 On March 6, in Los Angeles, Marina Cocolios represented Clitoraid during an event organized by Stephanie Hunter (see photo), artist specializing in erotic art and head of the Feminist Club of Antioch University. The women who attended were truly passionate about the cause and completely at ease with their body and sexuality. They immediately understood the importance of spreading such values among other women in general and in particular to those who are genitally maimed and who are seeking clitoral repair surgery. During her 30 minute presentation, Marina gave the complete scope of Clitoraid's project founded by Spiritual Leader Rael who initiated the revolutionary project to enable as many FGM victims as possible to have access to free surgery in the Pleasure Hospital that Clitoraid is building in Burkina Faso, West Africa.

At the end of the presentation, the girls donated to the Clitoraid project (www.clitoraid.org) and the next day the word spread around on campus about Clitoraid creating much curiosity. We'll be glad to give Antioch's students a second chance to hear about Clitoraid at a later time!

In the meantime, Stephanie Hunter has contacted a radio talk host show in Los Angeles who will hopefully dedicate an entire evening to Clitoraid. Lara, the head of Clitoraid in the USA, will be the guest speaker to talk about the history of Clitoraid and all of the advancements since 2007.
LAN_NEWS_85   LAN_NEWS_84
LAN_NEWS_86
LAN_NEWS_87