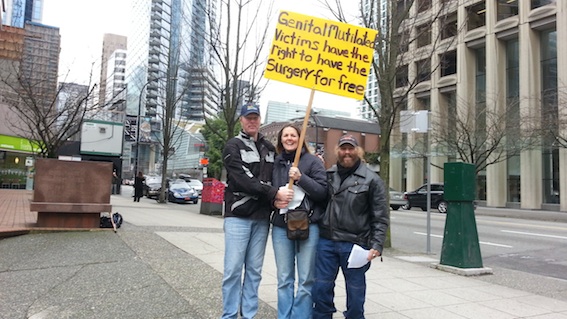 After hearing the appalling actions by the Catholic Church and  Burkinabe Government to stop the opening of the Clitoraid hospital in Burkina Faso therefore denying some eighty women the free right to have their dignity and sexuality returned to them,the Vancouver Raelian's demonstrated out front of the Burkinabe Consulate in Vancouver.
After hand delivering a letter at the consulate, we notified them that we will be protesting at their front door for a few hours with signs and handing out pamphlets informing the public.

ALL the people in the streets were very supportive of our actions, most people were not surprised to hear once again... more negative actions by the Catholic Church and denouncing the freedom and rights of women to have sexual freedom.
We handed out all our pamphlets, many people came to us after seeing the sign and thanked us for standing up and being there.

Rome, Italy
By Antonietta Tuzzi, head of Clitoraid in Italy

Nine of us met at the Burkina Faso Embassy in Rome, all of Raelian faith and active for many years in fundraising venues to help fund Clitoraid's hospital in Burkina Faso.

Our group was led by Antonietta Tuzzi, Head of Clitoraid in Italy.  Ms Tuzzi had met the First Lady of Burkina Faso, Mrs. Chantal Campaore at an international symposium on FGM in Rome last year and was eager to meet with ambassador about this matter that goes against everything the First Lady has been fighting for to eradicate FGM in her country.

Our protest started promptly at 10:30am and ended at noon as agreed with the authorities.
Police officers kindly supervised our event. They first prevented us from approaching the embassy contrary to what was originally agreed with them but they later allowed us to get closer.
We held our poster and give out many flyers explaining our protest.
Then,  the police commissioner escorted Ms. Tuzzi inside the embassy to deliver the letter to the ambassador who was expecting her. She explained to him the nature of our protest and handed him the letter. 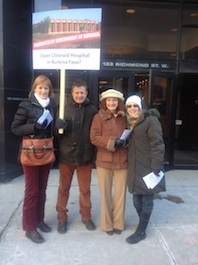 In Toronto, on Friday March 7, a small group of four Toronto residents , Diane Brisebois, Louise Turcotte, Gisèle Gagné and Patrick Rhein faced the cold weather in front of the Burkina Faso consulate to change the negative influences that have created some challenges in that country.
We distributed numerous flyers during two hours around lunch time. Some people were interested and supported our cause. They said that what we were doing was important and many were curious to go and visit our website to find out more about our hospital.
Just before we left, I brought our letter to the consul but he was unavailable to discuss in details so Mrs. Diane Brisebois- Henning, the wife of Dr. Henning,  will set up an appointment to see him in the upcoming week and hopefully get his support to reverse the discriminatory  decision of the BF government. Dr. Henning is one of the two volunteer surgeons who flew to Burkina Faso to operate on FGM women.  Yesterday, Dr. Henning saw his temporary licence to practice medicine in Burkina Faso suddenly revoked by the Board of Doctors of that country. Their reason? "irregularities in their file that was not detected earlier". The three other US volunteer doctors were prevented from practicing medicine in BF in the same way. Mrs Brisebois-Henning will have much to discuss with the consul next week.
It was great to be in action for this wonderful cause and I am sure that all the seeds we are planting are creating a ripple effect of awareness and change on the planet.

30 people marched early this morning in front of the building where the Burkina Faso consulate is located.

Daniel Turcotte, Modjé and I met Attorney Gérard Coulombe, the honorary consul in person. Thanks to the lobbying of Gabriel Bluteau, we were able to obtain a personal appointment with him. Our meeting lasted 30 minutes. Attorney Coulombe, was surprised of what happened, as he was aware of this reality about the excision and didn't understand why his government was preventing our hospital from opening. He also knew personally the First Lady who has been directly involved for many years in the mission of helping women victims of FGM. In fact, Mrs. Chantal Compaore was in Montreal in 2008, giving many conferences about that subject and Mr. Coulombe met her at that time. He does not understand why she declined the invitation to preside at the opening of the hospital. He has the intention of finding out.

He told us he will contact the actual ambassador in Ottawa, and Mrs Juliette Bonkourgou (ex-embassador of Burkina Faso in Ottawa). She is back in Burkina Faso and apparently has big political influence.

Attorney Coulombe will communicate with Modjé following his research. He is a very nice man who is well informed about the African culture. He also asked us to keep him posted on the development of our project. 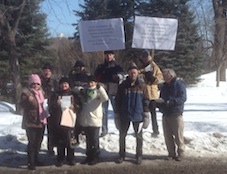 We went to protest outside the Burkina Faso Embassy in Ottawa, Canada. There were 10 of us, playful and happy to be there for our African sisters. For years, many of us gave countless hours of our time to organize and collect donations for the opening of this wonderful hospital that repairs the harm done to thousands of women who don’t have the means to regain their integrity and their dignity at no charge.

Armed with a firm conviction, this is the very reason why – as representatives of the Canadian capital – Mr. Rolland Gaudette and myself went to meet with the ambassador.

The Embassy hadn’t responded to our written request for an interview with the ambassador but as we arrived at the event, the Canadian Republican Guard police officer told us that our request had been granted. It was interesting to see how everything unfolded. We were left standing at the entrance until the ambassador came down to meet us. There were a dozen people around him, including two people who filmed us throughout the interview. Two women were standing at the far end of the corridor watching us too.
The ambassador explained that certain steps needed to be taken before issuing a license and that, in no way, did it have anything to do with religious discrimination. He told us that his government was doing everything it can to stop FGM. We felt a certain discomfort on the part of the ambassador. On the other hand, the other men around him expressed very warm smiles. When our representatives left, they were accompanied by one of their counselors who told us that the government had never done anything to impede on Raelians and their activities. He said he was pleased with our approach and that it was going to help them.

Once back in the street, a passerby came to us to learn more and asked many questions. She is a University student in international relations. A photographer with the newspaper Ottawa Citizen took many pictures and told us there was a story on FGM that was under way and they would include us in the story. 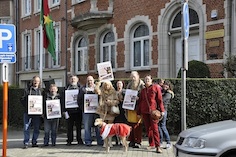 There were 9 of us at the protest expressing our indignation on the ban against the opening of the Pleasure Hospital.
The team made an encouraging contact and spoke with a Burkinabe individual. As for me, I made it inside the embassy. I had an appointment scheduled with Mrs. Narré, representative of the ambassador. I was very kindly greeted and I handed a folder on Clitoraid, the letter to the ambassador and two copies of the press release.
The secretary of the ambassador was surprised and expressed her regret for what happened in her country. She was astonished to learn that it was under pressure from Catholics because circumcision is a custom practiced predominantly in sub-Saharan Muslim communities. If the ambassador had not been traveling she would have granted me an interview with him. Mission accomplished!

Thanks to all those who were present and for coming all this way to support and defend women’s rights. The struggle for human rights is far from over. On this first day of Women's Day this is another example of how we must remain vigilant.
I love this quote: "The only thing necessary for the triumph of evil is for good men to do nothing." Edmund Burke. So let us arm ourselves with love and the desire for the Good to triumph. 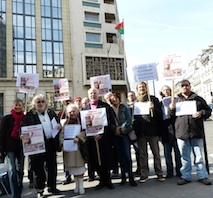 The Clitoraid French team and the Raelian Movement came together to raise awareness at the Burkina Faso Embassy in Paris and five Burkinabe Consulates in different regions of the Hexagon to show their dissatisfaction with the prohibition of opening of the Kamkaso Pleasure Hospital built by CLITORAID in Bobo Dioulasso.

Thus, 15 demonstrators, some of whom came from the West of France, personally delivered a formal letter to the Ambassador’s assistants in Paris. Fliers were distributed and someone with ties to the Vatican Ambassador in France was also present and was shocked to learn that the refusal to open the hospital was caused by the Catholic Church. He promised he would write to the Holy See ....

For other regions in France, the same letter was handed out at Consulates in Nice, Marseille, Lyon and Bordeaux.

A call to action was also sent to all our regional mailing lists that counts several thousand supporters and Raelians asking them to write to the Embassy and different Consulates to accelerate the process of the hospital’s opening.

On the lobbying front, several celebrities were contacted by Françoise Delcoustal on behalf of Clitoraid. And speaking of personality, Miss Princess Loona who has very good relations with the famous humorist Dieudonné went to inform him of this event and as you can imagine he was not at all surprised by the opposition.

Of course, social networking was also a venue and the news was also broadcasted on Facebook in the Rhône Alpes region, see photos.

So, overall it was a successful action on this historic day of March 7, which celebrated the opening of the first hospital specialized in clitoral reconstruction spurred by a wonderful idea of Maitreya Rael.

Critics did not believe it, but one thing for sure is that they were able to see that we keep our promises and we are reliable when it comes to improving humanity’s living conditions. 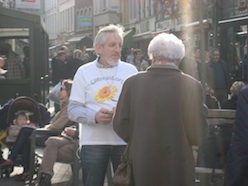 On the 7th of March a member of my team delivered the letter at the Honorary Consulate of Burkina Faso in Rotterdam (even if it has not been possible to speak directly with the Consul). 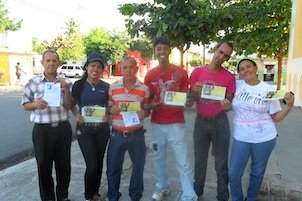 Our team decided to organize a demonstration in our city though no Burkina Faso embassy nor Consulate are present on our island. We distributed 1,000 flyers informing the public of Burkina Faso and the Catholic church stopping Clitoraid from opening its Pleasure Hospital in Bobo Dioulasso.
LAN_NEWS_85   LAN_NEWS_84
LAN_NEWS_86
LAN_NEWS_87