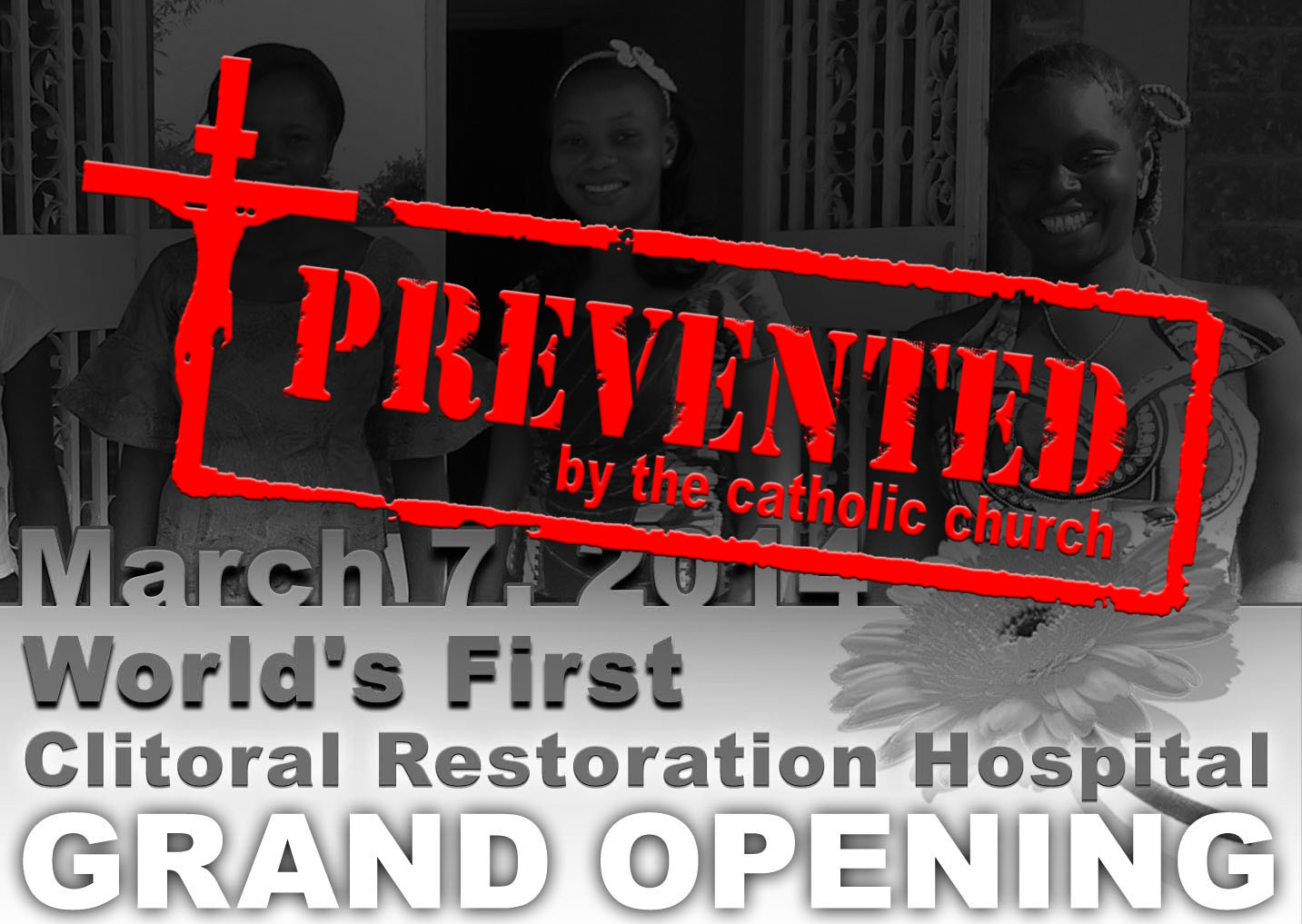 LAS VEGAS, March 3 - According to a statement released today by the nonprofit organization Clitoraid, pressure from the Catholic Church and other detractors of the International Raelian Movement (IRM) has caused Burkina Faso's government to block the scheduled March 7 opening of Clitoraid’s clitoral repair hospital, known as the Kamkaso Hospital, in Bobo-Dioulasso, Burkina Faso. Nicknamed “the Pleasure Hospital, the Kamkaso facility is the first of its kind in the world.

“Although the government has suddenly withdrawn its approval for surgeries to be performed there, this facility, once open, will provide free surgery for victims of female genital mutilation,” said Dr. Brigitte Boisselier, president of Clitoraid and spokesperson for the IRM. “The procedure repairs the physical damage they endured. But this wonderful mission has now been stymied by the Catholic Church and its cronies, who are conducting a smear campaign against it for their own selfish motives.”

“In the meantime, the surgeries we had scheduled will still take place over the next few weeks, at another hospital in Bobo-Dioulasso,” she said. “We’re going ahead as planned.”

She went on to describe why the Kamkaso Hospital will not open on March 7.

repeated assurances from regional and national officials that the hospital could open on March 7, the health minister of Burkina Faso has explained to a representative of AVFE, our local Clitoraid partner, that the license will not be approved for our scheduled inauguration date of March 7,” Boisselier explained. “Nevertheless, we will go ahead with our inauguration ceremony as planned. And our surgical team will still operate on the patients scheduled for the procedure, but that will take place at another hospital."
She said that an official source who requested anonymity told her that strong pressure from IRM detractors, especially the Catholic Church, was responsible for both the license refusal and the cancellation of the First Lady of Burkina Faso’s participation in the opening ceremony.

“By seeking to prevent our opening, the Catholic Church has become an accomplice of the criminals who mutilate the genitals of African women,” Boisselier declared. “Along with its mission of restoring mutilated clitorises for FGM victims, Clitoraid’s Pleasure Hospital will be a strong deterrent to those who still practice this barbaric custom. They would stop making the excisions since it’s foolish to destroy something that can be readily restored.”

Boisselier said this stance taken by the Catholic Church against Clitoraid is hardly a surprise, given the Vatican’s record.

“Those blocking our opening are the same criminals who support pedophile priests and money laundering by Vatican banks,” she said. “And their directives against using condoms are responsible for thousands of unnecessary AIDS deaths in Africa.”

“This pressure to close us down will only delay the opening,” she said. “Our attorneys are already looking into various legal options and there will also be worldwide protests in front of Burkina Faso’s embassies.”

As evidence of the pressures brought by the Catholic Church, Boisselier cited the following declaration made against the Kamkaso Hospital by Professor R. Marie Charlemagne Ouedraogo, a Knight of the French Legion of Honor and Commander of the Sovereign Military Order of Malta, a well-known branch of the Catholic Church.

“This is a big campaign of fraud organized by the sect of Rael with the complicity of certain doctors of Burkina Faso! The health ministry and the governor are beseeched to stop this poisonous campaign! Also, the complicit doctors will have to appear before the medical board very soon!"

"How can a doctor who performs these surgeries himself at very high cost to his patients accuse us of a fraudulent campaign when his rates are way too high for the poor women who planned to come to the Kamkaso hospital?” Boisselier asked. “What is the real fraud here? Clitoraid offers free surgeries performed by competent volunteer doctors, and they follow a procedure that has been published officially by its originator, Dr. Pierre Foldes of France. It has already been performed on thousands of women.”

Boisselier went on to elaborate about what she considers the real reason for the smear campaign against Clitoraid and the Kamkaso hospital.

“The real reason for this delay in the hospital opening is clearly linked to the fact that this purely humanitarian project was initiated by Rael, spiritual leader of the Raelian Movement,” she said. “The people putting pressure against this hospital prefer to pursue a pseudo-philosophical vendetta for their own profit instead of thinking of the 80 women who will be in Bobo-Dioulasso to have their free surgery between March 3 and March 14.”

According to Boisselier, the surgeries will be done at the hospital of a doctor friend who will host Clitoraid's medical team.

“Our surgeons are licensed to perform surgeries in Burkina Faso,” she pointed out. "The people responsible for these pressures against us should be ashamed. The Kamkaso hospital is the collective effort of thousands of people of various philosophical backgrounds. They have all contributed to restore the pleasure of life to thousands of women who experienced deep trauma. To prevent them from receiving this voluntary and free help simply because the people offering it don't believe in their god is outrageous. But this campaign against us is perfectly aligned with other misdeeds of the Catholic Church, which teaches that suffering is a source of awakening and ultimate spirituality.”

Boisselier explained that for Raelians, pleasure is the most beautiful source of fulfillment.

“We will continue doing our best to help FGM victims get their dignity back as women and enjoy their right to enjoy physical pleasure and fulfillment,” she said.

The building inauguration ceremony will be held at Clitoraid’s Kamkaso Hospital on March 7 starting at 10 a.m. A press conference will follow.
LAN_NEWS_85   LAN_NEWS_84
LAN_NEWS_86
LAN_NEWS_87