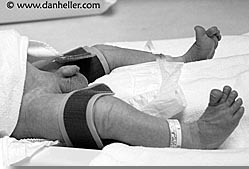 “Bodily harm is against the fundamental rights of all children, and we can’t understand when a so-called civilized country such as Germany would allow its male babies to be so readily mutilated legally!" said Nadine Gary, spokesperson for Clitoraid. She was referring to male circumcision, typically performed on male infants who have no say in the matter.

“On Nov. 28, the United Nations passed a resolution that condemns all cultural and religious arguments in favor of FGM because the act constitutes a gross violates of children rights,” Gary said. “But how can the U.N. ban Female Genital Mutilation and not denounce Male Genital Mutilation as well? Is it exempting certain religions from respecting the fundamental right of baby boys?”

“It’s been done for centuries under the pretense that a god requested it, but no religion should be allowed to harm infants or children who can’t give informed consent,” she said. “We’re setting up a hospital in Africa that’s due to open next year, where female victims can go to have genital repair surgery for free. “And, thanks to Clitoraid, thousands more can find relief at several clinics in North America. But we’ve also been getting e-mail from hundreds of circumcised men who want to have their own mutilation undone. They need help too! So, as Rael has repeatedly stated, it’s urgent to have all the old scriptures reviewed by an independent committee on human rights so that all religious group practices are in agreement with the Declaration of Human Rights.”
LAN_NEWS_85   LAN_NEWS_84
LAN_NEWS_86
LAN_NEWS_87